A Billion Hits - Countries and Browsers

Over 2011 the GeoNet web site has received over one billion hits. It’s a surprising number given the optimization we do to reduce the number of hits (which put us in the top ten for download speed in an independent audit of New Zealand web sites). We process the logs to track which browsers people are using so we know which versions to target. We can also use the ip address from the request to figure out which country the request originated from which can help with capacity planning.

Not surprisingly the majority of the traffic for 2011 came from New Zealand (86%) - there were a lot of felt earthquakes in New Zealand. The other perils (volcanoes and tsunamis) that cause a lot of international traffic to the GeoNet web site were fortunately quiet.

Traffic to the GeoNet web site by country for 2011 - New Zealand dominates at 86%.

With eighty-six percent of requests for 2011 coming from New Zealand we can make a reasonable survey of the web browsers being used in New Zealand. We also look at the type of web browser used to make the requests by vendor and version. Why do we care? The browser fetches and renders HTML, CSS is used to style the rendered page (to change the look), and JavaScript is often used to change the style further and to make the page interactive. There are several different versions of HTML, CSS, and JavaScript. The browser vendors implement slightly different subsets of those standards and occasionally add their own extensions. If a web page is anything more than very simple it can be a great challenge to get it to behave consistently in different browsers. To be fair, this situation has improved immensely over the last year but is still complicated by requests from older versions of browsers.

The great majority of traffic to the GeoNet web site comes from four main web browsers;

Plotting traffic by browser vendor over the year we see similar trends as elsewhere. We don’t seem to see the same rapid upswing in use of Chrome that is seen elsewhere and we’re a little higher on Firefox and Safari. 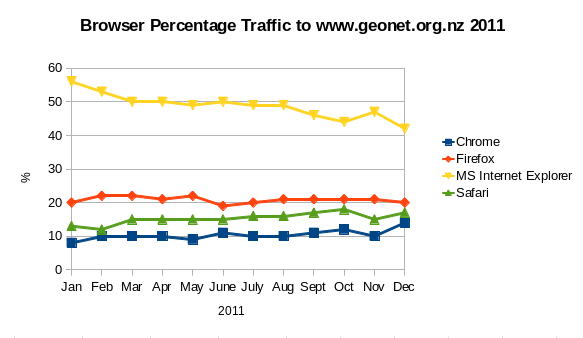 This is where things get tough - there are different versions of every vendor’s browser. From the four vendors above we have seen requests from a total of twenty two different browser versions. If you want to see a web developer cry take them out for a beer or two. When the alcohol starts to replace the caffiene, they relax a little, and their fingers stop twitching, ask them about cross browser compatibility. They will probably spend the rest of the night sobbing on your shoulder.

Chrome and Firefox - The Rapid Releasers

Chrome and Firefox (since version 5) both use a rapid release schedule - they are releasing versions something like every six to sixteen weeks and pushing updates to the browser so that it is very easy for a user to stay on the latest version. The aim is to get new features to the user quickly. It makes the plots over the year look spikey - a new version is released and then replaced pretty quickly. 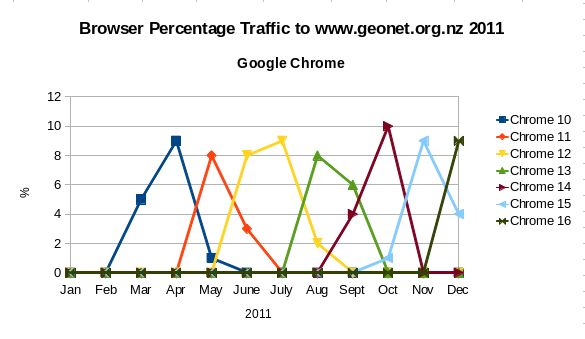 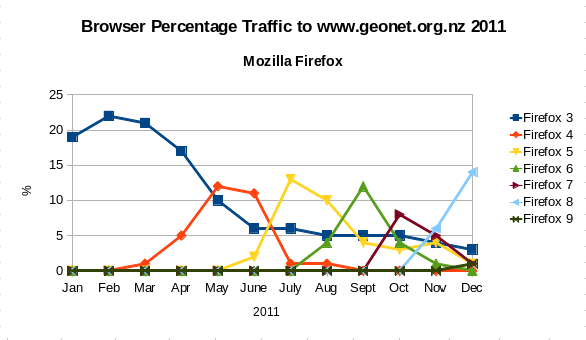 Firefox has used rapid release since version 5. There are still some version 3 users hanging in there though.

Safari and IE use a different release approach so the plots are smoother. 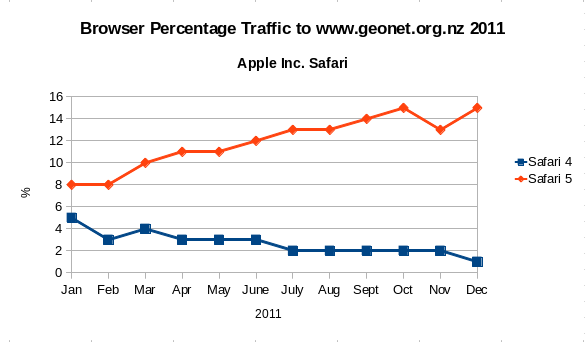 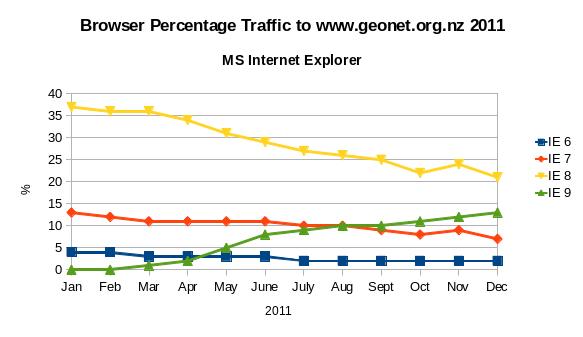 Time for an Upgrade?

If you are using an older version of one of these browsers it could be time for an upgrade. Some of them are free. Try as many as you can. Give each one a couple of weeks to see if you really like it. Visit some sites you are familiar with. You might be surprised by extra functionality - somewhere a web developer has been heroically using progressive enhancement to make that site work in as many browsers as possible but work even better in those where it can.

It’s not just the look you may notice either. Modern browsers are incredibly fast at downloading and rendering web pages. There are other features too - a favorite of mine is a thread for each tab in Chrome. Recall the old days when something bad happened on a web site and the whole browser crashed? Now just the tab dies and you often get the option to wait for it to recover. Nice!

Now if we can just get them all to implement the same HTML standard the same way, everyone will be winning.